Barcelona is a covergirl with a troubled past, a high-maintenance celebrity who stumbles into her town car after a night of dancing and heavy drinking several times a week, but still somehow manages to arrive fresh-faced on set every morning. She’s gorgeous, reliable, and expensive to cast. Make-up hides her scars– when uncovered, some add to her beauty while others mar it. Her career’s hot but she’s walking the edge– will she thrive on her ever-expanding popularity and exposure?

My highlights (note: I skipped the famous nightlife because I was traveling alone and not in the mood to party-party unless I found some fun strangers to do it with…I didn’t):

Sagrada Familia– While in Barcelona in 2010, I skipped the inside of this unfinished Gaudí construction because of the nearly 20-euro price tag. Mistake! The Sagrada Familia wasn’t just a highlight of this second trip to Barcelona– it was a lifetime travel highlight. I snagged a ticket online for the first time slot of the morning and was only about the fifth person inside the church, so there was little to detract from the size of the space. The glowing stained-glass windows illuminated sloping columns of different widths and shapes, a gorgeous forest of stone flowering with sculptures and colorful ornamentation, serene but imposing in the pre-crowd hush.

Elevators drop visitors above one façade or the other; I chose the Nativity Façade. The strange sloping angle of the towers gave me a kind of vertigo as I looked up, as though I were looking through a fish-eye lens, while open balconies allowing me to lean out over the church entrance on my way down the tightly spiraling staircases provided the more-traditional looking-down vertigo. I love heights but I’m not sure I’d recommend the experience to those who don’t.

Visiting the Sagrada Familia was like climbing a huge unfinished sand castle. One of the coolest things about it is that it’s literally being built around you. Construction workers crawl like ants along inaccessible parts of the church high above; scaffolding and tarps obscure spires and glittering embellishments, hints at what will be. OK, have I gushed enough? I think, sí.

Jai-ca Bar– A tiny tapas place full of locals, with a huge menu. I ate grilled squid and fried eggplant, washed down with a beer, for about 8 euros.

Sandemans New Europe tour– Surprise, surprise. These free walking tours almost always make my highlights. I like to take them as early as possible in a trip because they help me decide what to see and give me some interesting background on the city’s sights and neighborhoods. The guides are good resources for honest opinions about attractions and local favorites (much better than tourist offices, who tend to refuse to offer any real opinions because apparently they get into trouble if they endorse one business over another).

Waterfront wandering– I did some A+ people-watching there. Starting from the massive Columbus statue-capped pillar, I followed the water past stands full of charming old antiques and students drawing them, along the palm-dotted promenade and then onto the beaches, where I watched some enterprising gentlemen trying to sell homemade mojitos to lounging beach-goers, a giant group of very pale Englishmen playing soccer/football, and toddlers wobbling happily in the sand. You’d never guess that these soft sandy beaches are fake, imported from Egypt since the 1992 Olympics (thanks for that fun fact, Sandemans!).

Parrots!?– I was probably too excited about the little green birds I saw all over the place, making squacky noises and stealing from pigeons. Chasing the birds around and trying to get a good shot, I started to remind myself of the squirrel-chasing foreign tourists I used to laugh at in Central Park. If you go to Barcelona and want to see these little guys, try the Rambla del Raval.

Travel time: I took the IDBus from Lyon to Barcelona, which stopped three times to let people on and off and twice for rests, for a total of about 10 hours one-way in transit (would have been about 7 if we hadn’t stopped so much).

Lodging: Tailor’s Hostel. It has beautiful decor and is very well-located, but I booked a 12-person mixed dorm– always a risk. Unfortunately it was full of obnoxious teenaged (?) boys who spilled alcohol and soda on the lockers containing people’s stuff, made a lot of noise late at night, and were generally rude. As I’ve said before, hostels are all about interaction and a relaxed social experience, but that doesn’t mean common courtesy should be totally abandoned. 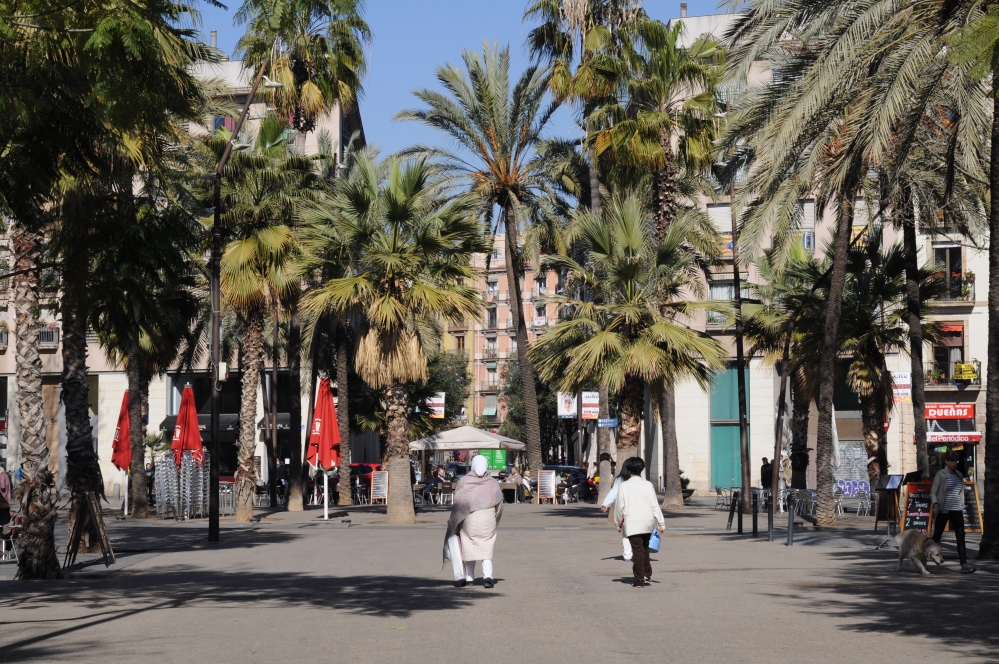