Every time I go to London, I love it more. The city is a business hub, but has an enduring reverence for literature, art, and intellectual curiosity. A place of royals, tourists, immigrants, foreign investors, politicians, workers of all kinds, students, and ceremonial cavalry horses “who may bite or kick” (according to actual warning signs), it swarms but accommodates.

London’s had its proverbial day (the sun now sets every day on the British Empire), but it seems to be enjoying even better days. More than any other city I’ve been to, it whispers insistently with the past while still humming determinedly with the future, and modern life flows like the Thames over and around the city’s history (often literally). New buildings, covered in massive glass panels, give the city a gleaming, contemporary look, but they also reflect and highlight the historic buildings they dwarf. Lost in the hustle and chaos of the metropolis, these ancient churches, townhouses, and remnants of fortifying walls sometimes look like stony ghosts peering out of a mirror, hoping to be remembered.

I love this dichotomy of old and new, past and future, art and commerce, though I recognize that it’s easy for me to wax romantic about London. I’m just a visitor, a lifelong consumer of British stories, and an anglophone expat excited to hear and speak my native language– I don’t have a chance against this city.

I posted some highlights after my London trip last year, but by visit #4 I still haven’t reached the bottom of London’s well of possibilities. Here were some of my favorites this time, which was a more relaxed, meandering visit: 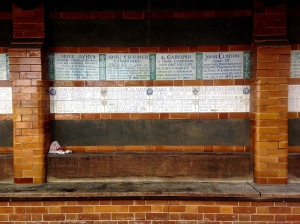 Travel Time and Trip Costs: There will soon be a new express train from Lyon to London (yay!) but this time I stopped in Lille on the way there and Paris on the return to switch trains. The journey takes about 6-7 hours one-way, which is honestly fantastic. When you take security and transportation to and from the airport into account (the train drops you off in the city center), it turns out that flying from Lyon to London is actually more time-consuming (and probably much worse for the planet, too).

As for trip costs, this time both of us don’t want to know. The train and lodging prices were pretty brutal and the exchange rate is always terrible. However, I walked almost everywhere and many museums are free.

Lodging: Six-woman dorm at Wombat’s City Hostel on Dock Street. It was about 30 pounds a night, which hurt (yes, plenty cheaper than a hotel, but I’ve been spoiled by other cities), but it was clean, well-located, and the beds were comfortable, the lockers free and electronic. The construction they were doing wasn’t super-pleasant at 8 am, however.

I drank a bunch of tea, bought too many books, and walked so much I think my right heel is permanently blistered. Until we meet again, London!