Before last weekend, I’d been to Provence several times and never seen a single lavender flower in bloom. The season is easy to miss (generally only running from mid-June to mid-July, plus or minus two weeks on either end, depending on the exact location and the year’s weather), but I thought it would be a shame to have lived so close and never made a real effort to see les champs de lavande. Keeping the unpredictable end-of-season date in mind, I jumped on a train July 10th with my fingers crossed.

After exhausting all saner options (automatic car rentals too expensive, tours booked up, no public transport access, too far to walk), I reluctantly rented a bicycle in Manosque to ride to Valensole (a route I picked after scrutinizing this handy map). I should mention that I am not an accomplished cyclist, especially when sharing the road with a lot of traffic. Indeed, I was not surprised when I crashed the bicycle from a standing position five minutes into the rental and had to take it back to be repaired (I didn’t do any serious or permanent damage to anything but my pride). Then I was off, white-knuckling it and trying not to die on a highway that went through several rotaries in the first few miles of the ride.

On Google Maps, the route looked fairly straightforward: follow the D907 to the D6 all the way to Valensole, where there be lavender. Valensole is on a plateau (the Plateau de Valensole), and I hoped that Manosque was also on said plateau, for obvious reasons. It was not. Most of the ride was one long climb up onto the plateau– even when the pavement LOOKED flat, I struggled. Although the traffic thinned out and the scenery changed from strip malls to lovely trees and brush harboring birds and butterflies and smelling of pine and herbs, it was a deeply unpleasant time and I did a lot of swearing, loud groaning, and stopping to sit in the dirt. I was keenly aware that I might already be too late to see any lavender, or that the fields might be too far away for my weak, undeveloped cycling muscles. 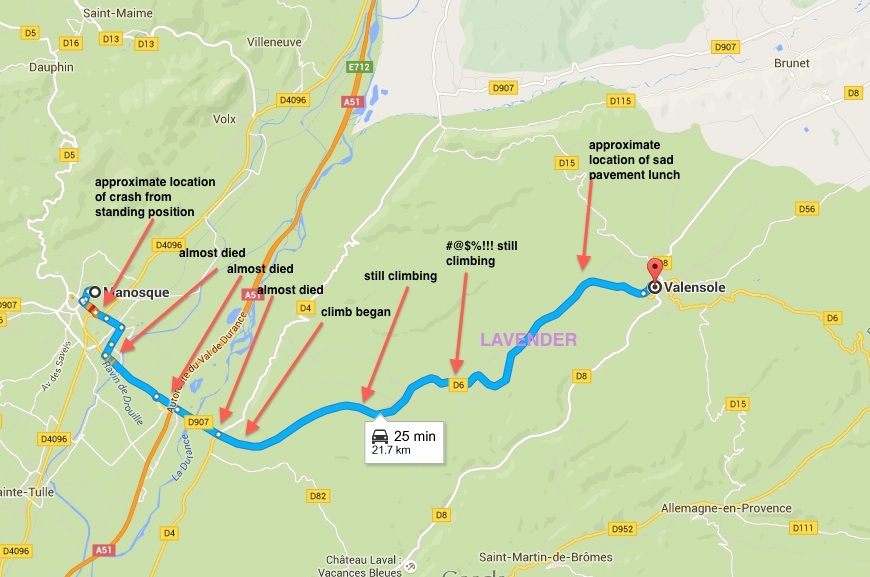 Just when I’d become sweatier than I thought possible and my quads and butt were screaming, the trees fell back and I came out onto the open plateau, rounded a turn in the road… and saw an expanse of such vibrant purple that I gasped. A calm sea of purple to the horizon, with small human dots moving across it. Apparently the growers don’t care if people wander in their fields (they probably do care, actually, but what else are they supposed to do?) and I stopped regularly to stand between rows of the plants at the edge of the fields and breathe in the smell of spicy sun-soaked lavender flowers in full bloom.

Somehow I’d hit the timing JUST right, because they were beginning to cut the plants in a few fields. They were running over the field with a massive harvester that turned the plants from purple to green as it passed over them, like a rumbling color-eraser. Another machine was rolling the lavender up into gooey round bales. Lavender being slaughtered smells wonderful.

I continued on to Valensole, where I’d planned to have a little pit stop. Alas, the commercial area was over-crowded with tourists and there weren’t too many places I felt comfortable anchoring “my” bicycle. This ended up being my favorite thing in Valensole:

I did need a break to refuel my broken body, so I played it classy and collapsed in some rare shade behind a closed pharmacy at the edge of town, eating my packed lunch on the cigarette-butt-strewn pavement. Then I hopped back on my bike, hoping I had enough fuel for the return trip. I could have continued further along the plateau to encounter more lavender, but I was satisfied with what I’d seen already. Plus I was pitifully sore and a little sunburned and I didn’t want the trip to go from total wimp-fest to full-on ordeal. I meandered back the way I came and stopped at a couple of distilleries to look for some gifts: soaps, sachets, and lavender honey.

After a little more lingering along the fields, I mostly coasted back to Manosque, which made me feel like less of a weakling because it was then that it became clear how much of the trip out had been uphill. It was much more fun to fly down off the plateau, and took much less time. By then it was about 95 degrees out with not a cloud in the sky and the top of my thighs and forearms were beginning to get red, so the ease of the trip back was a real relief. I returned to the rental shop with the bicycle and myself in one piece, satisfied with the outcome of my quest… a feeling of accomplishment that lasted until I got to the train station a mile away and found the rented bike lock still rolled up in my backpack. Win some, lose some?