The Côte d’Azur conjures images of starlets, Lost Generation writers, designer-clad convertible-owners, and tanned beach babes, all strutting and partying their pretty selves alongside the sparkly blue sea. In reality, it’s also chock full of @55holes, overpriced meals, elitist shades of the ridiculous, and tourists with pretensions. But oh, the sea! It’s just as sparkly and blue as you could hope, like a giant puddle of melted gemstones.

There’s fun in glamour, but I tend to like just a pinch of grit in my glitz. Although the beach resort and shopping attractions of the Côte d’Azur alone may not be enough to draw me there, the hiking is. There last week, I took a break from horrifying the Cannes public with my battered, hole-filled play shoes and baggy sweatshirt (everyone else seemed to have a very fancy sweater tied around their neck) to walk in the Massif d’Esterel, a bright red-pink mountain range along the coast, from Trayas to Théoule-sur-Mer.

The trail practically starts at the Trayas local train station, so I simply picked it up and walked into the hills. Before joining the GR 51, it was hard to be sure I was on the right trail; at one point I wrongly chose a path that got narrower and narrower until I was in a thorn bush on the side of an almost-cliff (oh #$%! but the view was great!) Fortunately, since it’s a short coastal hike with good visibility, general orientation is very easy, and it isn’t hard to reconnect to the trail if you lose it.

The trail ribbons up and down hill after hill, each one a sweaty work-out but none of them traumatic.

The path mostly consists of reddish brown soil and layers of small rocks that are perfect for slipping and sliding– I could almost hear these rocks laughing maliciously as I tripped over them or kicked them into my own way and then tripped over them. The steepness of the inclines gives the rocks plenty of opportunity for their wicked games, especially when they work together with sharp, blood-thirsty branches and thorns.

Gnarled little trees and scrubby spiny green bushes line the way, along with brilliantly colorful flowers of all kinds. The day I hiked there were so many flowers blooming that, in combination with the breeze, sea, dust, and sun-warmed stone, they made the air smell like actual perfume. I’m not exaggerating– if I could bottle that smell for rainy days I would, because it is heaven.

It’s incredible that these mountains should be less than two hours by car from the cliffs of the Calanques de Marseille/Cassis. The red lumpy rock of Esterel peeks through its dark green covering in a way that reminds me of landscapes I’ve seen in Corsica and the American southwest, while the sheer Calanques are predominantly a chalky white, grey, and beige. United by the fantastically blue water, these neighboring regions remind me how unexpectedly diverse the geography of France is, a patchwork landscape with a deceptively homogenous image abroad. 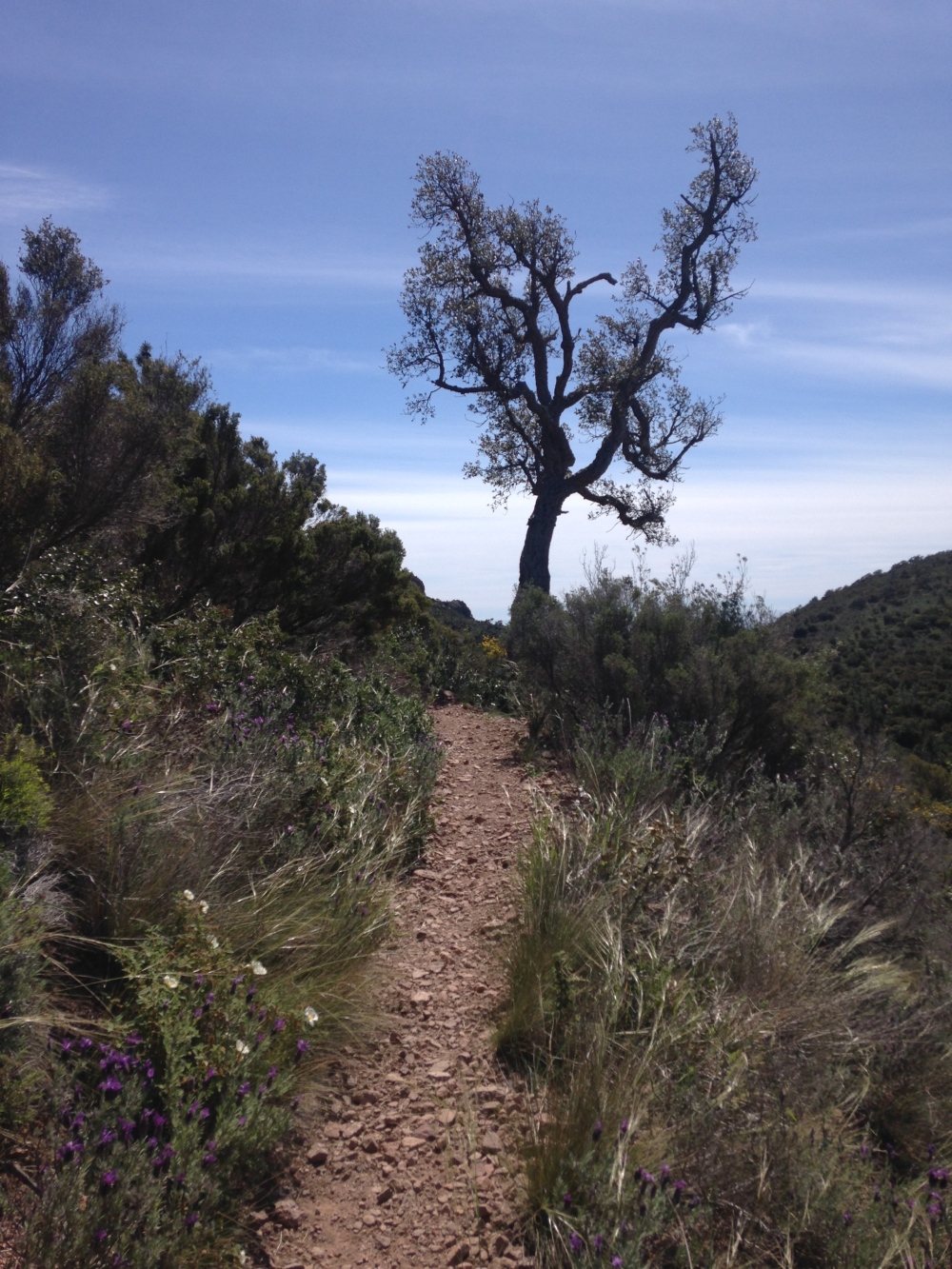 Eventually, following the GR51 signs, I came out of the hills and into the town of Théoule-sur-Mer, which at this time of year feels like a private beach. There were just a few scattered families and a crowd of old men playing boules. I have no doubt that in another few weeks things will start really hopping, but for now it’s a tranquil place (aside from the high-stakes beach boules, of course). 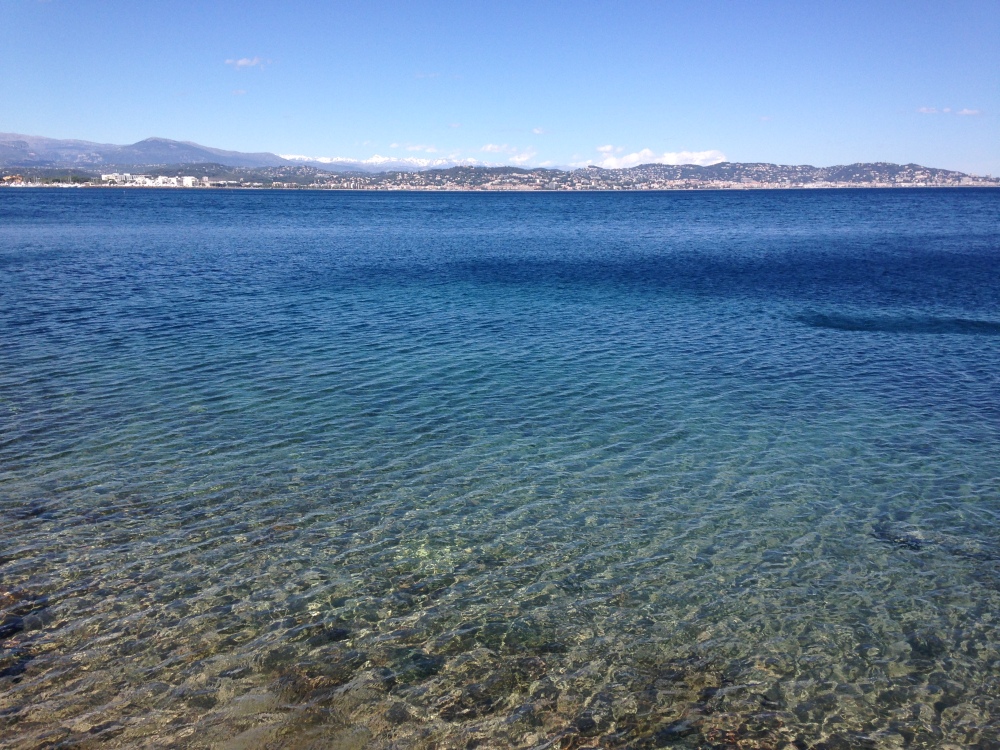 I walked along the water in Théoule-sur-Mer to the train station and headed back to Cannes. Slightly scraped- and bruised-up and even less socially acceptable than I’d been when I left that morning, I was also refreshed, sun-soaked, and sore in a good way.

Time required: I found it took me about 2/3 of each signed time estimate. It took about 3.5-4 hours total to get from Trayas to Théoule-sur-Mer.

Level of difficulty: Medium. There’s plenty of steep walking uphill, but there’s very little scrambling and the tallest of the peaks is less than 450 m high.

Transportation: Regional train to Trayas. Round-trip to/from Cannes costs about 7 euros. Trains are relatively frequent, but there are a couple of larger gaps in the day, so time your hike to accommodate this unless you want to sit around for a while. Anyone wishing to travel the route I did should note that the train station at Théoule-sur-Mer has been converted into a veterinarian clinic, and there is neither composter machine nor ticket machine/counter. So you’ll need to either take your chances without a ticket, buy one on the train, or buy one in advance.

Other: Wear sunscreen and pack a snack, for sure. There’s not much shade and neither town seemed to have a very good variety of refueling options.