A very belated tribute to the neighbo(u)rhood(s) that launched me into London.

I’ve had a soft spot for East London for a while*. On previous visits to the city, it was an affordable but central area to stay in. I liked the cobblestone streets and lamp-posted alleys, the blend of old and new, dusty and gleaming. Throughout the last five to ten years, the area entered the last transformational throes of gentrification– it’s now well past peak hipster. Late at night seven years ago, I skirted drunkly lurching homeless men as I made my way through east London’s narrow backstreets; these days you’re as or even more likely to find a stranded, sobbing bachelorette or a tight-jeaned, curb-perched hipster smoking a hand-rolled cigarette.

It is of course a bittersweet transformation: gone is much of the grime, but also some of the character, and many individuals, families, and small businesses can no longer afford the rent. There’s some great coffee, but it’ll set you back 3 pounds. The desolate, creepy streets may be better-lit late at night, but they’re full of pampered, puking young professionals and crowds of tourists shuffling from one Jack the Ripper murder site to the next. 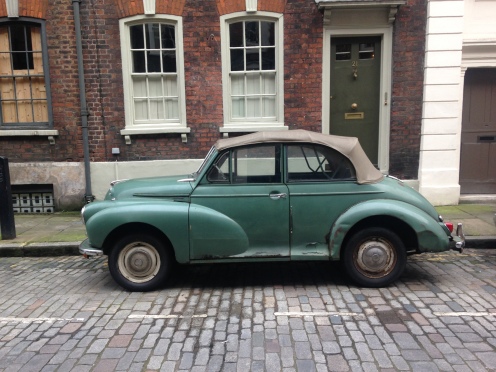 I lived hipster-adjacent in graduate student housing in the Spitalfields area long enough to find my own East London nooks. If you’re ever on that side of London, here are some mostly-off-the-tourist-path tips:

-The BEST coffee in all of London is at Ozone Coffee Roasters on Leonard Street. Rich, complex, roasted right on site. Delicious (albeit pricy) food too, in a cool multi-level space where you can watch the chefs and the goings-on around the roaster.

-You can meet some farm animals at Spitalfields City Farm or Hackney City Farm. Being at these two little pocket farms, both tucked away on quiet blocks, is like taking a mini-holiday from the city. Cheap, home-grown bites to eat are available if you work up an appetite petting the goats.

– St. Dunstan in the East is a lovely shell of a church (hollowed out by a century-spanning double whammy: Fire of London damage followed a few hundred years later by the Blitz), the garden inside bursting its seams. It’s one of the most peaceful, beautiful places to sit in the city– especially on a weekend morning when the surrounding offices and take-away joints are empty.

-A literal stone’s throw away from Brick Lane and its many (overrated) curry houses, Gunpowder is a polished hole in the wall, the inside of a tiny culinary geode. Creative, tapas-style Indian food packing what tastes like all the flavors.

yum – I promise it tasted more delicious than it looks

-Despite the crowds and the frankly mostly-disappointing restaurants, Brick Lane’s worth a visit in the off-hours for cheap hold-outs from the old days– samosas sold from tidy bins and handed over in little grease-soaked bags (wish I could remember an example), salt beef bagels with spicy mustard and a pickle (Beigel Bake)– as well as pricier novelties like sourdough donuts (Crosstown) and handmade filled pastas (Burro e Salvia, just off Brick Lane on Redchurch Street…)

-Not really a spot for good coffee, but head to Hanbury Hall for a calm and spacious workspace. Layered London is full of converted spaces: banks converted into bars, churches converted into homes. Hanbury Hall is an 18th-century chapel that’s been converted into performance space and a cafe, with pretty furniture and local art and plenty of well-tended plants. You do risk running into the odd event booked into the whole space, but mostly it’s just a nice sanctuary from the busy narrow streets outside.

-Just around the corner from Hanbury Hall is one of the most interesting bookshops in London, Libreria– its zany design and themed curation sets it apart, and never once have I left without at least three new books tucked under my arm.

-There’s interesting, bizarre, funny, smart street art peeking from every nook and cranny in Shoreditch. You can take an art tour to hear more about it, but I was happy enough to keep my eyes peeled and my phone camera ready… 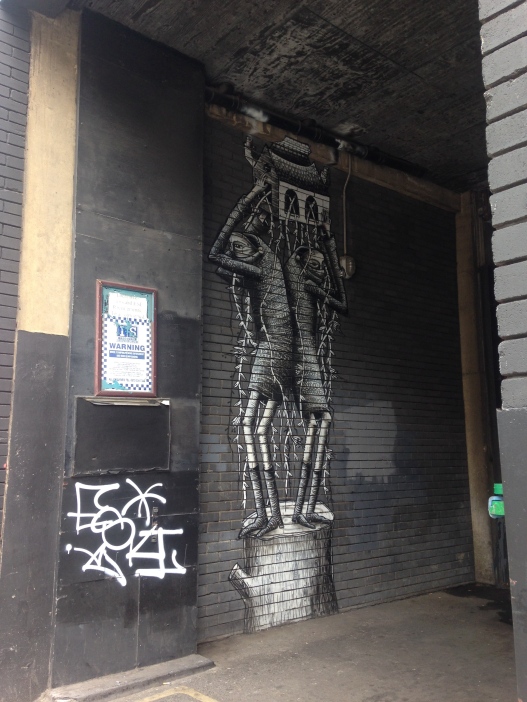 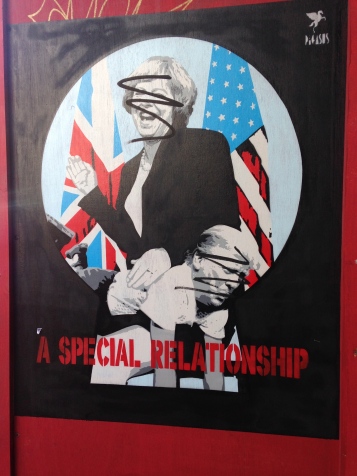 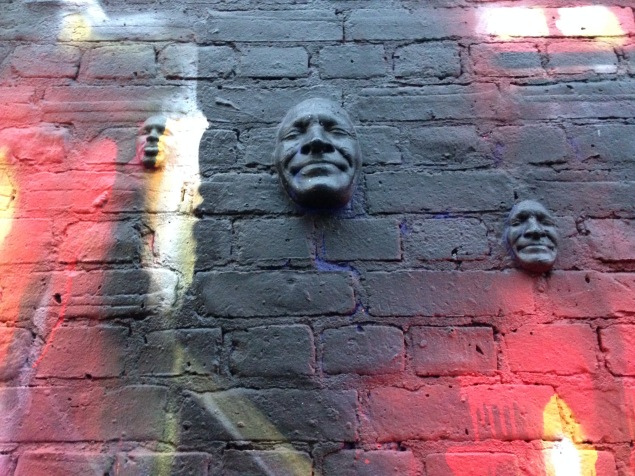 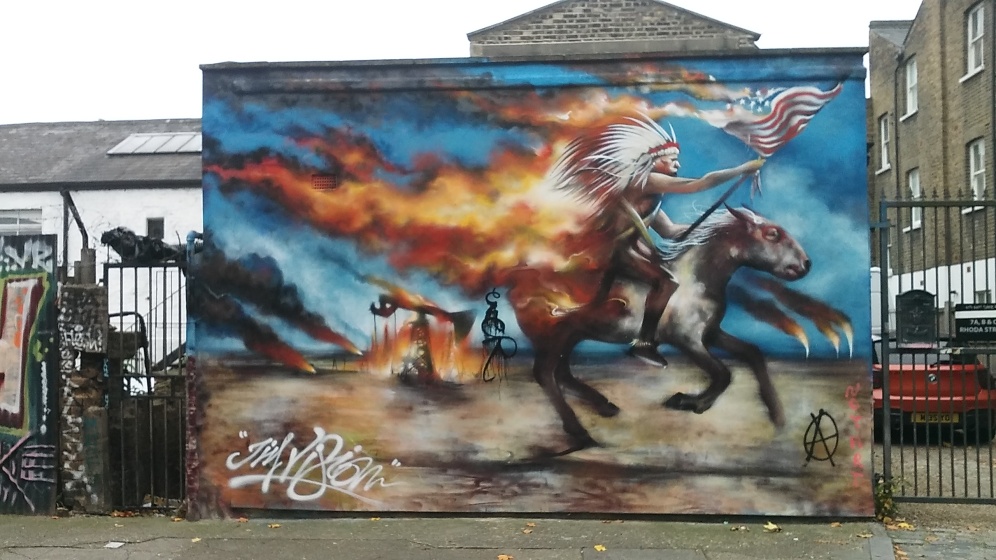 -A visit to the Whitechapel Gallery and its adjoined cafe (or one of the many pubs nearby) would be a great first date. I really want someone to have this date: a guy I was supposed to meet there cancelled on me one hour beforehand because “he got a phone call.” Anyway, it’s a small, quirky gallery so there’d be plenty to talk about and a natural progression to drinks afterward. I was pretty pleased with myself when I put it together– he’s a fool.

-Another great date: Wilton’s Music Hall. Wilton’s is an absolutely stunning space that hosts all kinds of acts, tucked haphazardly out of the way like a really juicy secret. I went to a story-telling event there called OneTrackMinds where word artists of various kinds talked about songs that had changed their lives. It was cozy, touching, hilarious, and perfect for the intimate venue.

–Columbia Road Flower Market is almost unbearably crowded once it’s in full swing, but it’s still worth a visit for the atmospheric hawking and, of course, the beautiful flowers.

–Regent’s Canal is both logistically convenient and surprisingly fun. A narrow little ribbon of water cutting through central London, it’s hidden by the often-lacklustre buildings lining it, and you can walk through the city along it, hopping off whenever you feel like rejoining the hustle-and-bustle of the streets.

The canal continues out of London into a system running all over the country, so it’s full of transient houseboats and segmented by working locks operated by both amateurs and experts. Its banks are dotted with cafes, pubs, mansions, a zoo, even a floating bookshop. The portion running through east London is lovely but relatively uneventful, though I can recommend starting here and walking west, perhaps kicking off the walk with “breakfast in bread” at The Barge House.

-The viewing areas at the top of the cartoonish Sky Garden nearby are always booked, but at the border of east London is a lesser-known overlook: Heron Tower. This is slightly cheating, because I almost don’t consider the Liverpool Street station area to really be East London – it’s technically within the “City”– but I’m including Heron Tower because it looks over the whole eastern expanse of London. Go up to one of the two bars/restaurants at the top of the tower at mid-day (or, for Duck and Waffle, in the middle of the night) for a dazzling view that will only set you back the cost of whatever beer or cocktail you choose to hold in your hand. The elevator ride alone, a dizzyingly rapid ascent, is worth it. 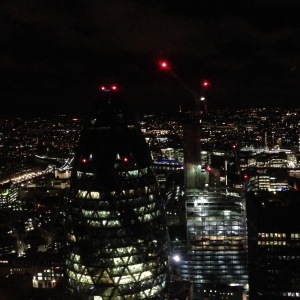 I won’t miss the hipsters, or the vomit-splattered streets, or the trendy boutiques, or the depressing under-construction office complexes, or the occasional meth-head, but I adore east London and am so glad I had the chance to live there. I can’t encapsulate its gritty charm: the delightful dive bars and historic pubs, the tiny music venues; the quirky bookstores, the remnants of ancient wall, all of the abandoned and repurposed time-flotsam and -jetsam. It’s not hard to imagine ghosts stalking its tangled streets, the bright and the living making too much noise, most of the time, to see them.