I love to be outdoors, but this love (and my overall spirits) dim in cold, wet January and February.

A few weeks ago, I found my shivering, pale self researching the destinations closest to London that might offer a tiny bit of mid-winter sun and relatively dry walking trails, at a budget price and with minimal planning, and landed on… Mallorca!

Magnet for summertime stag-do shitshows (Britain’s biggest export) and German retirees (listen for the click of hiking sticks), Mallorca is the largest of Spain’s Balearic Islands and just a two-hour flight from London Stansted. It’s also a beautiful, manageable escape, with a vibrant, bustling capital city and lovely countryside covered with orange and lemon trees and rugged mountains and coast.

To save money and effort, I booked three days in Sóller, a valley town at the foot of the Serra de Tramuntana mountains, sandwiched by a couple of days in the main city of Palma on either side. There is plenty more to see in Mallorca, but I didn’t want to rent a car and without one transportation can be a bit of a headache (the network is pretty comprehensive, but there are fewer buses this time of year).

Here are my off-season, escape-from-the-gloom highlights…

–Eating ensaimada at C’an Joan de S’Aigo. This historic café is an ornate visual treat, and so are the ensaimadas, local spiral-shaped pastries consisting of layers of soft, buttery, sugary dough and sometimes filled with chocolate, apricot, or almond. There are surely other places to get these, but the atmosphere in this café is part of the fun, despite the constant influx of tourist groups. Note: Hot chocolate, in Spain, is a literal cup of melted chocolate. Somehow I’d forgotten this. 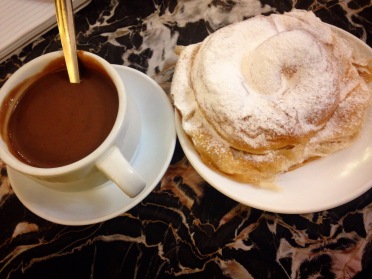 –Climbing to Castell Bellver, a 14th-century circular castle sitting just to the west of the city center. It’s worth a visit for its stunning architecture, bite-sized historical exhibits, and hilltop views of the city. 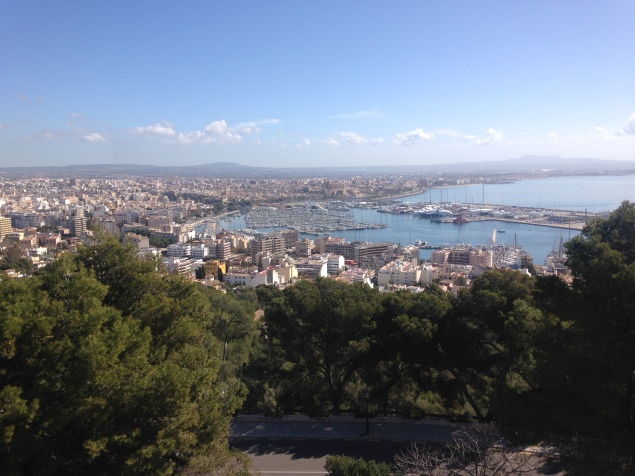 –Ducking into the Museum of Mallorca, a small collection in a quietly grand palace just inside the medieval city walls at the edge of the Old Town. Local treasures are always worth a look, and for a bargain 2 euros this spot is at very least a nice way to unwind and get out of the sun for a while.

-Speaking of local treasures, giant grocery stores are basically El Dorado as far as I’m concerned. In Palma, a trip down into the food basement at El Corte Inglés department store yields everything you need to know about local (upper-middle-class, urban) tastes. Light-green fruit that looks like it’s made of play-do and covered in big thumbprints? Check! This location also happens to have a rooftop bistro, with gorgeous views over the rooftops of the city center… 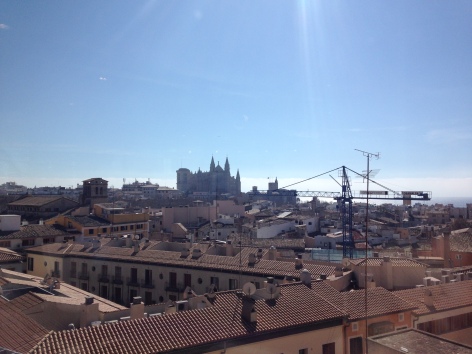 –Tapas: if you’re not eating tapas in Spain what are you even doing? I had some good ones at Bar Día and Bar Coto.

-Practically within view no matter where you stand in Palma center, you literally can’t miss the Cathedral of Santa Maria of Palma. It’s impressive enough from the outside if you’re on a real budget, but its sheer size is best appreciated from within. However, it’s a steep (in my opinion) 8 euros to do so.

–Walking, walking, walking all around central Palma and its Old Town: keep an eye out for very old windmills, Gaudí-influenced design, and local fun (I accidentally arrived the day before the local Carnaval parade, which was a delight, and left the day after the local women’s march).

–Staying one luxurious night at the glorious Hotel Gloria de Sant Jaume. In the off-season, one of my favorite things to do, if I’ve got room in the budget, is to splurge for one night on a really fancy hotel that has rooms going at off-season rates. This place is beautiful, lovingly restored, personable, and sumptuous. It also made me wish for a trust fund.

…in the Serra de Tramuntana:

–Quick walk: Sóller to Port of Sóller (about 30-45 minutes) for lunch, which found me portside on the terrace at Kingfisher Restaurant enjoying a delicious plate of seafood squid-ink spaghetti and white wine. 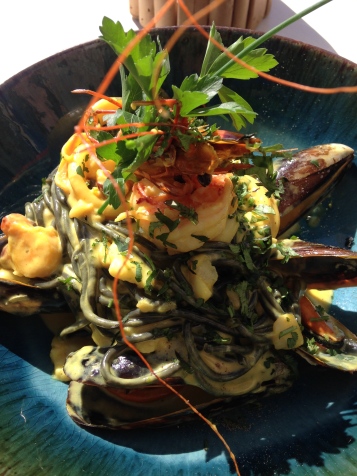 –Day Hike: Sóller to Cúber Reservoir via Biniaraix and back (well, almost… but actually instead of going all the way to the reservoir and then back-tracking, I decided to march off into the fog just short of the reservoir to follow a poorly marked trail I’d seen on my map. The idea was to make a loop back via Fornalutx but instead I ended up meandering through fog-cloaked hunting grounds until I stumbled onto the dangerous MA-10 highway and continued along that instead.) Still, Biniaraix, the precipitous mountain views, and Fornalutx are all lovely. 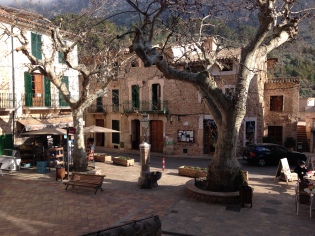 -Day Hike: Sóller to Deià along the GR221/Dry Stone Route with a stop at Cala Deià and return via Cami des Rost. Dazzling sea views! Rustling olive trees and spring flowers in bloom! Waves lapping a quiet beach! A dreamy hillside village! What more could you want? At the halfway point I sat for a cold beer and sandwich on the deck at Cafe Sa Font Fresca in Deià. 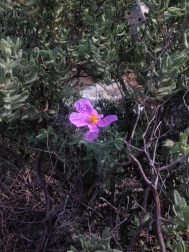 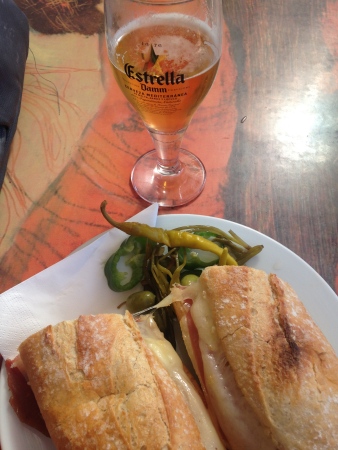 …and finally, a note on logistics:

-To get to Sóller, you can take the vintage train from Palma. I don’t want to rain on any parades here, but unless you’re only going for a day trip I don’t recommend this. A round-trip ticket for the same day is 25 euro – if you’re not going up and back in the same day, you need to buy two single tickets for 18 euro each. I found the train crowded and slow, the rattling cars and tracks deafening (especially in the long tunnels the train goes through), and the views limited (although for day trippers they did stop the train at an overlook at one point so people could get off and take pictures). My advice? Take a picture of the beautiful train, and take the bus for better views and to save cash (bus fare was less than 5 euro).

-For hassle-free hikes (if, like me, you’re not planning to camp and don’t have much equipment), don’t count on maps, as there don’t seem to be any very good ones. Instead, pick routes that are well-traveled and well-marked, like any stretch of the GR221 Dry Stone Route.

-Getting to Palma from London: no-frills Ryanair (i.e. one carry-on bag), 65 pounds round-trip.

-Accommodation: mostly booked off-season deals a few weeks in advance, using booking.com and hotels.com – most nights of my trip were about 50-80 pounds. You could certainly go even cheaper if you don’t mind an airbnb or a hostel. 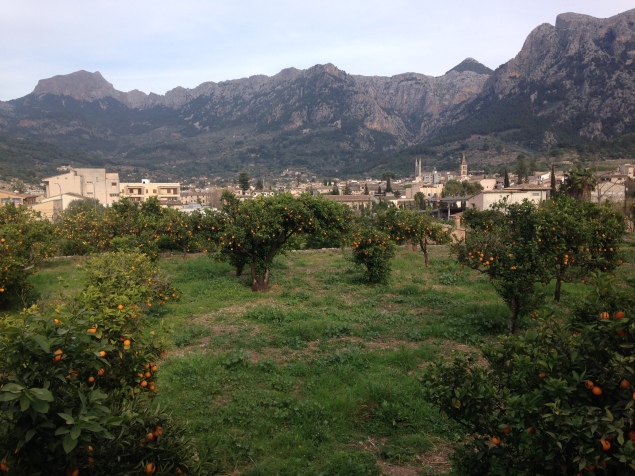