“We lost your car.” I suppressed an eye roll and forced an insincere giggle as I humored what I thought were the late-night flirtations of the sixty-something year-old ticket-taker, trying to edge past him toward the waiting sleeper train.

No, really: my train car was bust, and not only would I and three other passengers have to wake up at 3am to get off the train in Dundee, we’d then climb into a taxi (booked and paid for by the train company, at least) to be driven the last two and a half hours to Inverness.

So much for sustainable travel! It was in this inauspicious fashion that my journey north at the end of August began.

When a sleeper train isn’t busted, it’s a delight. There’s something wonderfully romantic about rattling across the countryside in a tiny train compartment. There are two major sleeper train routes in the UK: the “Night Riviera” to Cornwall and the “Caledonian” to Inverness or Fort William. Both have recently undergone revamps… but the roll-out of the new Scotland-bound trains has clearly hit some snags.

Inverness is a small city embedded in the Scottish Highlands on the northeast coast. It feels like the outpost it historically was – it’s easy to imagine a pre-Industrial ride through early-falling winter darkness toward the light of the town and the promise of hearth and whisky… though I’m romanticizing. Its present tranquility just makes it more difficult to imagine its other, more military identity as an outpost on a conflicted and violent frontier. Anyway, I found present-day Inverness a dynamic but cheerful and easygoing place to spend a few days, and an excellent base for pursuits of the outdoorsy and boozy variety.

-Ness Islands: Inverness sits in the crook of the Ness River’s pouring of Loch Ness into the sea via the Moray Firth. A short walk south of the city center, the Ness Islands sit like a giant’s stepping stones in the middle of the river, shaded by tall, dark pines. It’s gloomy and moody and chilly and misty. I took a calm walk, my steps muffled by the sound of the rushing river, watched some fly fishers off-shore, and spotted one of those little red European squirrels with the tufted ears.

-Victorian Market: It’s mostly dubious antiques and tourist kitsch, but this ornate covered market is still worth a walk-through on the way to somewhere else in the center of town. 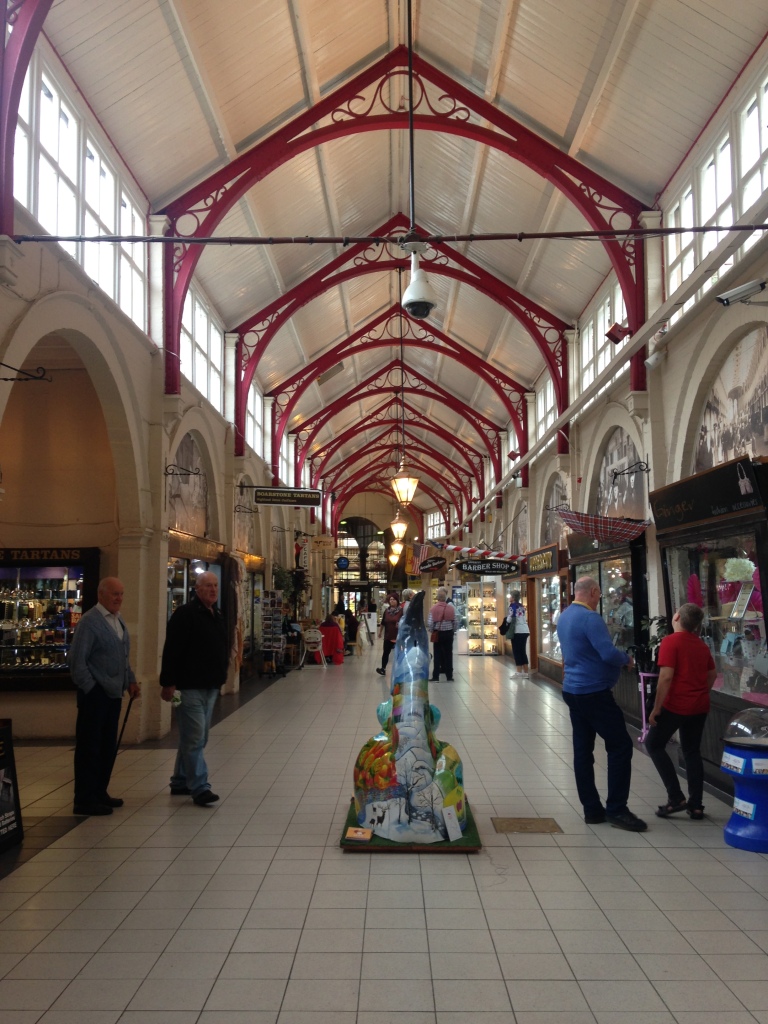 -Inverness Castle is a pinkish, not-that-old fortress presiding over the city from a perch various other defensive structures have sat on throughout the last few hundred years. It’s not completely open to the public, but the view over the town and river from its grounds is worth the five-minute walk up the hill.

-Inverness Museum and Art Gallery, just below the castle, is a somewhat neglected but charming collection of artifacts and geological displays that made me feel ephemeral, and taxidermic creatures that awed and saddened me. I always seek out local museums because they are unique opportunities to wander amongst a region’s treasures and the stories it wants to tell about itself, and this one was no exception.

-I walked up to Merkinch Local Nature Reserve and Carnarc Point because they crouch alongside the Beauly Firth, where dolphins can sometimes be seen with the changing tides. I didn’t see any dolphins, alas, but I did see thistle, and more types of bees than I’ve ever seen in one place, and sea-birds stamping across the marsh, and lovely views across the firth. 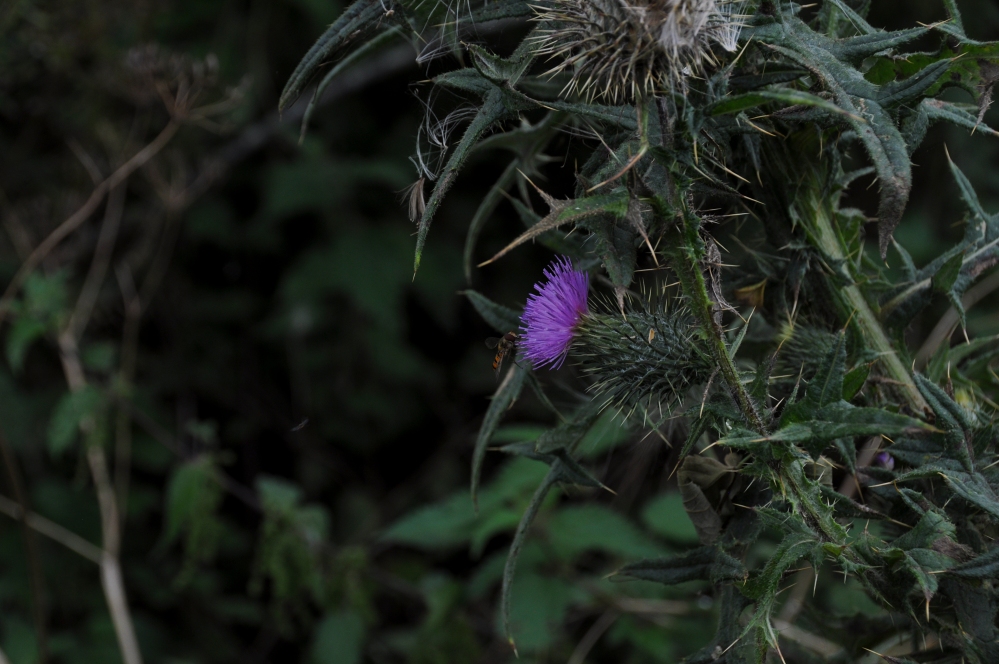 -I love an eccentric bookshop, and Leakey’s on Church Street in Inverness fits the bill: books piled up in every nook and cranny across two levels inside an old church. At the center, a big wood stove, and a massive desk where the manager sits dwarfed by the shelves and piles of books around him. The best part, though, is the extensive selection of old maps and prints.

-The moment I stepped into Hootananny I was swept up in the music of the small band camped higgledy-piggledy at one of the bar’s tables in the middle of the room. You could almost see sparks flying between its members, each of them a controlled flurry of motion, so talented and practiced that their instrument was like an extension of their body. The fiddler was somehow managing to play while furiously popping his long leg to the beat like a big white grasshopper. They were followed by an enormous, solemn bagpiper who slowly paced up and down the wooden floor, puffing his ruddy cheeks. It was exhilarating and wonderful. In typical fashion, though, a handful of people were intent on (actually, not intent on anything, which is really the crux of the problem) talking over the music or trying to get mediocre recordings of it on their phone, magic ruiners who reminded me of an experience I had in Lisbon years ago.

-I’m not ashamed to admit I made several visits to The Malt Room, a tiny, dark little whisky bar down an alley near the river. The staff was helpful and happy to chat whisky, the menu was extensive, and get this: they have a selection of whisky flights, including a WHISKY AND CHOCOLATE FLIGHT. Cannot recommend enough, 5/5. 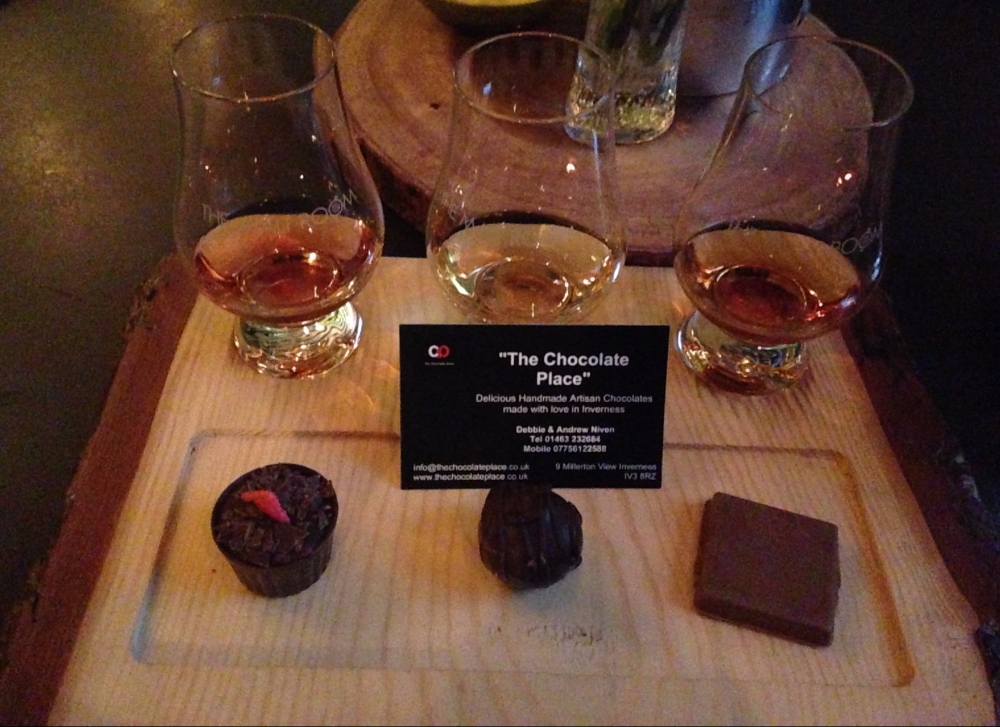 -To recharge, I really enjoyed Cafe Artysans, which is a no-frills, comfortable, bustling eatery on a social mission, employing at-risk young people and serving up very tasty and affordable plates, The Mustard Seed, which annoyingly popped up in every search of Inverness restaurants but was admittedly beautiful and delicious (and cheap, because they have incredibly sensibly priced lunchtime and early evening menus), with a rooftop terrace overlooking the river, and Black Isle Bar, linked to a local brewery and serving up cold brews and decent nosh in an open, lively space.

-I am of the opinion that whisky is a kind of liquid magic, so of course a Speyside whisky tour was on my to-do list. I booked one with Wow Scotland, and it was just right: no enthusiastic “how-are-we-doing-today-I-can’t-hear-you” participation required, just a handful of tourists guided by a pleasant and knowledgeable local who drove us around in a van so that we could safely sample all the drams. I had expected the standard whisky crowd – old white dudes – but actually it was mostly 30-something couples and a few solo travelers like me, a demographic make-up that also shocked the guide.

We rode through the lovely countryside past freshly-shorn sheep, thistle and heather-purpled hillsides and sparkling streams, and stopped at Tomatin (the taste of whisky hanging in the air, a big-time production with a down-to-earth, small-operation vibe, where we were told about the distilling process), Glenlivet (where instead of tasting off an old cask as we did at Tomatin, we sat around a shiny table with individual tasting settings), Glenfarclas (where we heard more about maturation and drank whisky on the go), the Speyside Cooperage (a surprise favorite, where we watched coopers doing the speedy but careful work of repairing and testing casks), and Macallan (deeply impersonal in its quest to highlight its particular legacy and tradition while undergoing a huge expansion, but the grounds were pleasant enough to wander). Hairy coos, always a big hit with the tourists, made several appearances.

-Last but certainly not least: most of the reason I traipsed all the way up to the Highlands was to hike in the Cairngorms, a mountain range and national park southeast of Inverness. For much of the year, this is some of the UK’s most forbidding land: cold, windy, snowy, bleak. But not the day I visited, which was so unusually warm and sunny that the locals I came across acted like they were having some kind of religious epiphany. I took the train to Aviemore and hiked part of the well-known Lairig Ghru hill pass. More on that in another post…

I stayed at Ardconnel House, which was comfortable and affordable, run by the affable Graham and Audrey. Over the best breakfast I had in Inverness, Graham gave me lots of tips as I was planning my hike, with plenty of concern for my safety but no condescension (a difficult note I find few men successfully strike – so, well done Graham!)

It’s now the darkest, dankest time of year, and it will be snowing in the Cairngorms. But do bookmark this list and wait patiently for the sun to come back (or at least for the ice to melt – it is Scotland, after all, and we must manage our expectations).