What did you do for Valentine’s Day? Candle-lit dinner? Chocolates? Roses? Hurriedly arranging to leave the city so you wouldn’t be lying when you told someone you’d been on a few dates with that you already had plans?

The “Night Riviera” train leaves London Paddington at 11:45pm several times a week and travels the length of England’s flexed left leg to the foot dipping its toe in the cold, ferocious Atlantic. Until recently, trains with sleeper cabins were phenomena I’d relegated to novels and old movies… and whenever I looked into it Cornwall seemed too expensive and distant for a weekend trip. Then I learned you could book a sleeper cabin, with snacks and breakfast included, thereby eliminating the need for one night’s accommodation and food, and I couldn’t buy a ticket fast enough (and about £120, pretty last-minute, is kind of a bargain for bed and transport in the UK).

It was even more romantic (in the narrative, idyllic sense– as you might have gathered from the above, I have no love life) than I imagined. The train itself is lovely, as is Paddington Station at night, and upon embarking there are dedicated staff to sign you in, show you your cabin, and note your breakfast preferences (tea or coffee, etc.) (Very) narrow corridors are lined with tiny, tidy cabins inside which everything basically has a way of folding into or out of  the wall or counter, including the sink. The bed is small but comfy, and the rhythmic movement of the train is soothing, though if you’re a light sleeper you certainly can’t expect a good night’s sleep. I wanted to move onto this nifty train and never leave. 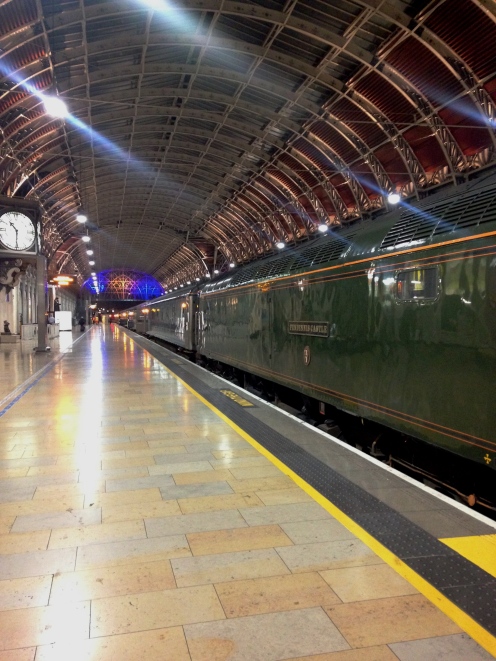 In the morning as the sun rose, I raised the shade and watched the countryside fly by and lovely Penzance (as in, “Pirates of…”) come into view, so sparkling and picturesque it was like I’d been transported to the edge of some alternate, illustrated reality.

out to the toe

I highly recommend the sleeper train; I had a great time. I booked via the Great Western Railway website– it’s a bit tricky, as you have to be sure to advance-reserve a sleeper cabin or you’ll end up in a regular seat overnight (a much cheaper but much less fun/comfortable/private option), and instructions are quite unclear (so thanks to The Man in Seat 61, for the great inside info!)

The train arrived in Penzance early enough for me to catch one of the few buses to the opposite northern coast. I took the 16A bus to Gurnard’s Head to pick up the South West Coast Path between there and St. Ives (equipped w/ this typically fantastic OS map). That stretch of coast is breathtaking – almost literally, when you consider the way the wind and crashing surf muffles all other sound and sense.

Vegetation is mostly low and scraggly, and the abundant yellow flowering bushes are thorny, with small, close, spitefully coupled petals. As someone from a culture so litigious people shamelessly sue fast food restaurants when they spill coffee on themselves, it was shocking and quite thrilling to find myself on a public pathway that goes no way to prevent bodily harm beyond posting small warnings about cliff edges and OPEN ABANDONED MINE SHAFTS. 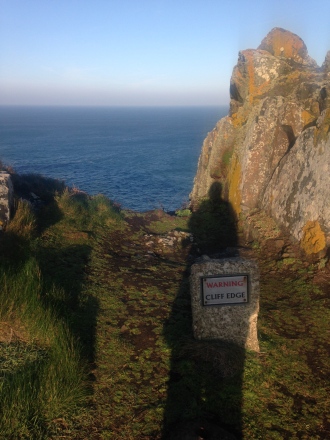 Throughout the day, I walked the fine line between trying not to get too muddy and trying not to break a limb: I did not succeed– at all– with the former goal (this island spurts water, all the time) but am pleased to say no trips to the hospital were required. It took between 3 and 4 hours to get to St. Ives, and was a pretty strenuous hike, given the frequent ups and downs and the need for careful footing in places.

Few others had set out to do some casual coastal hiking in mid-February, so I was able to fully appreciate the remoteness (note that my phone had no service, at all, until I reached St. Ives) and stunning desolation of Cornwall. The region stays relatively mild year-round but in winter grey days are plentiful (though I lucked out with bright sunshine throughout the day).

As soon as I reached St. Ives I set about eating the entire town– Cornish cream tea at the adorable Olive’s Café, locally-sourced river mussels at my very-sensibly-priced pub/hotel The Queens, local beer, a famous Cornish pasty (pastry filled with spiced meat, potatoes, onions, root vegetables) served me by a disarmingly handsome man behind the counter at St. Ives Bakery– thereby mostly negating any good I’d done my fitness. 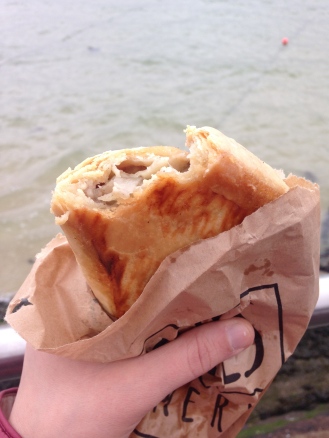 St. Ives, with its quaint narrow streets and passageways and gorgeous golden beaches and fun little shops, is surely an absolute nightmare for a crowd-phobe like me in the high season. But off-season it was wonderful. Some attractions were closed (e.g. the St. Ives Museum), but it was more interesting to hear locals greeting and gossiping with each other, benefit from some outside-London manners, and watch dogs running full tilt across the beach (not allowed come Easter-time and high summer). 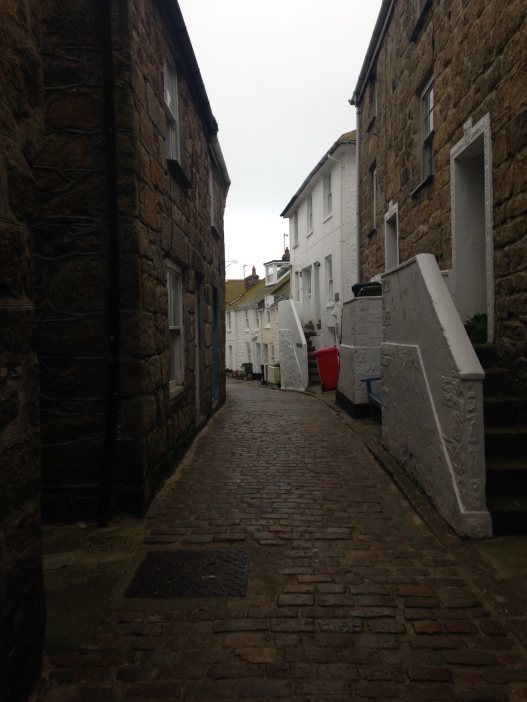 Fewer people meant fewer prospective prey for the extremely aggressive seagulls, however. Having grown up spending plenty of time at the beach and knowing full well that a lack of vigilance while eating around seagulls can mean a trip to the emergency room, I was humiliated in St. Ives when a bird swooped down, landed on my shoulders, and skillfully swallowed at least a third of my fresh pasty, stirring up excitement from scores more of the monsters, who were circling and screeching above. I still have both of my eyes so I guess I should just be grateful.

I browsed the little shops, I watched surfers enjoy the sublimely teal water, I climbed St. Ives “Island”… and mostly just had a low-key good time taking in a part of the country I’d never seen before. I skipped the pricy Tate (not huge on modern art to be honest… especially when it’s going to make a dent in my wallet) and the Barbara Hepworth Museum, but if that sounds like your thing there’s plenty of it (plus lots of local galleries) in St. Ives.

The next day I headed back to London on a super-off-peak train (~£50 total) via St. Erth, and my two-day get-away felt like more than enough time to see (and eat) a slice of lovely Cornwall. 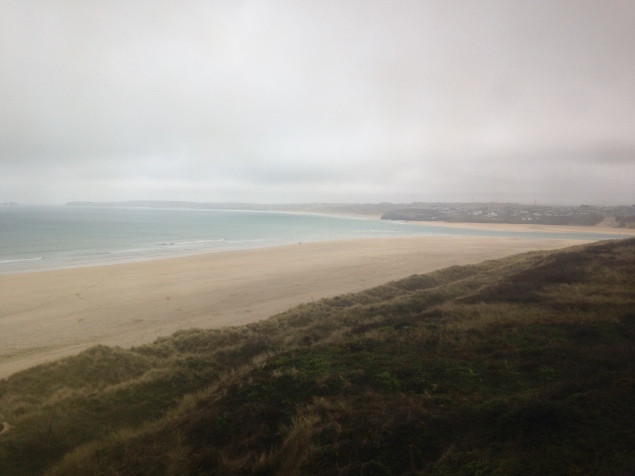 view from the train as I left St. Ives – look at all that empty off-season beach…